Bert Smells – A Children’s Book About a Mischievous Spaniel

Bert Smells is a Children’s book about a mischievous Spaniel, whose insatiable appetite for all things smelly lands him in trouble! 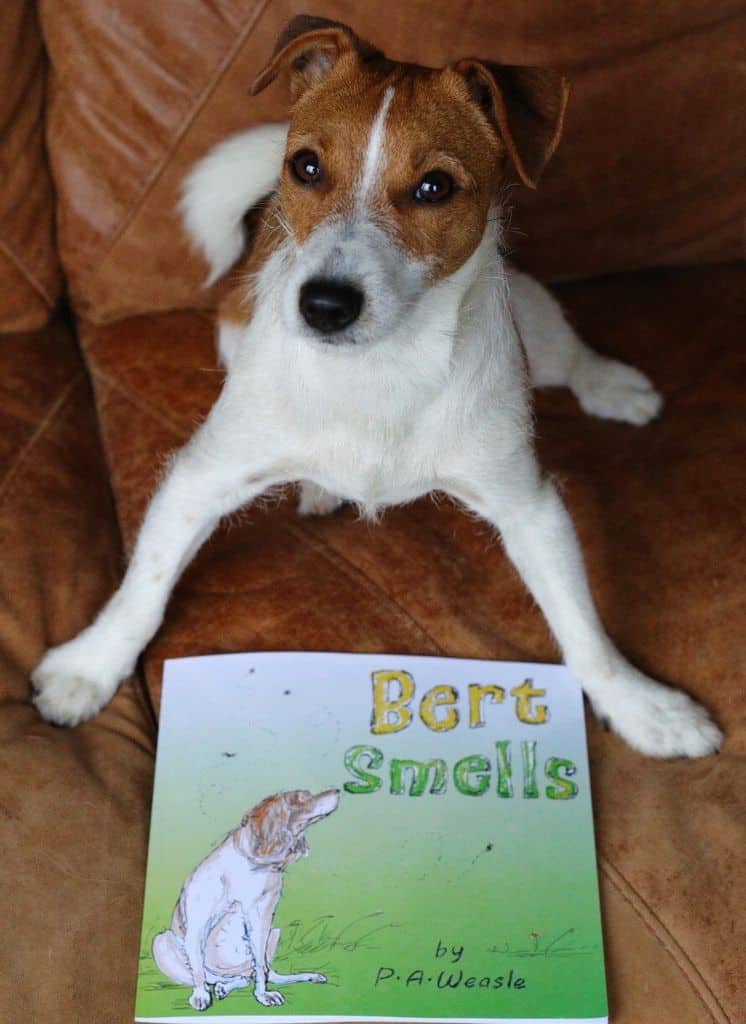 For those of you who regularly read my blogs, you will know that I usually review dog friendly places or dog related products.

This blog is a little bit different, as I was asked to review a children’s picture book.

Having been a primary school for 15 years, children’s literature is something that is very close to my heart.

Coupled with my obsession of all things canine, I was eager to read all about Bert and his adventures. 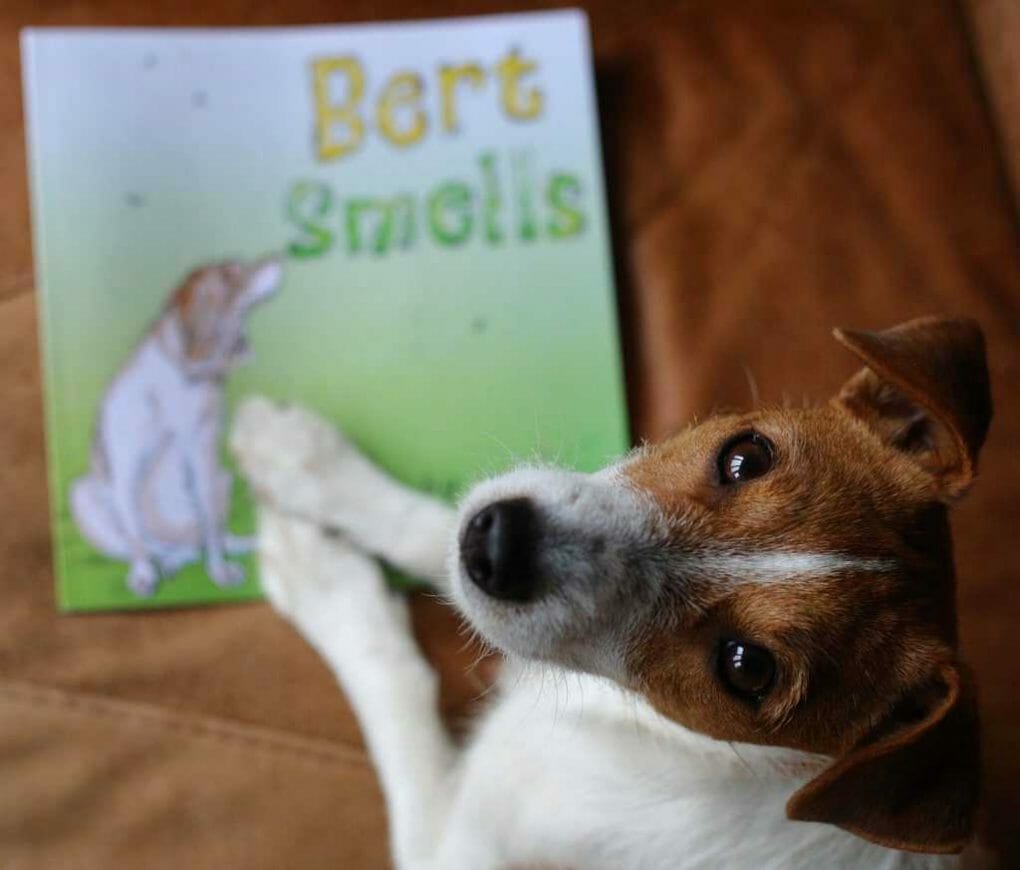 Bert Smells is an enchanting, thought-provoking tale about a beloved spaniel. The story touches on many of the emotions that young children experience, and often struggle with. Notions of prejudice, individuality and loneliness.

The story of Bert Smells is inspired by an incredibly loved rescue spaniel called Bert. Bert is about ten years old and is seriously adorable. Just have a squiz at his Instagram account and you’ll see exactly what I mean.

Bert was adopted almost three years ago by his doting owners Suzanne and Richard, who live just outside London.

They adopted Bert after he was heart-wrenchingly left abandoned on the North Circular. 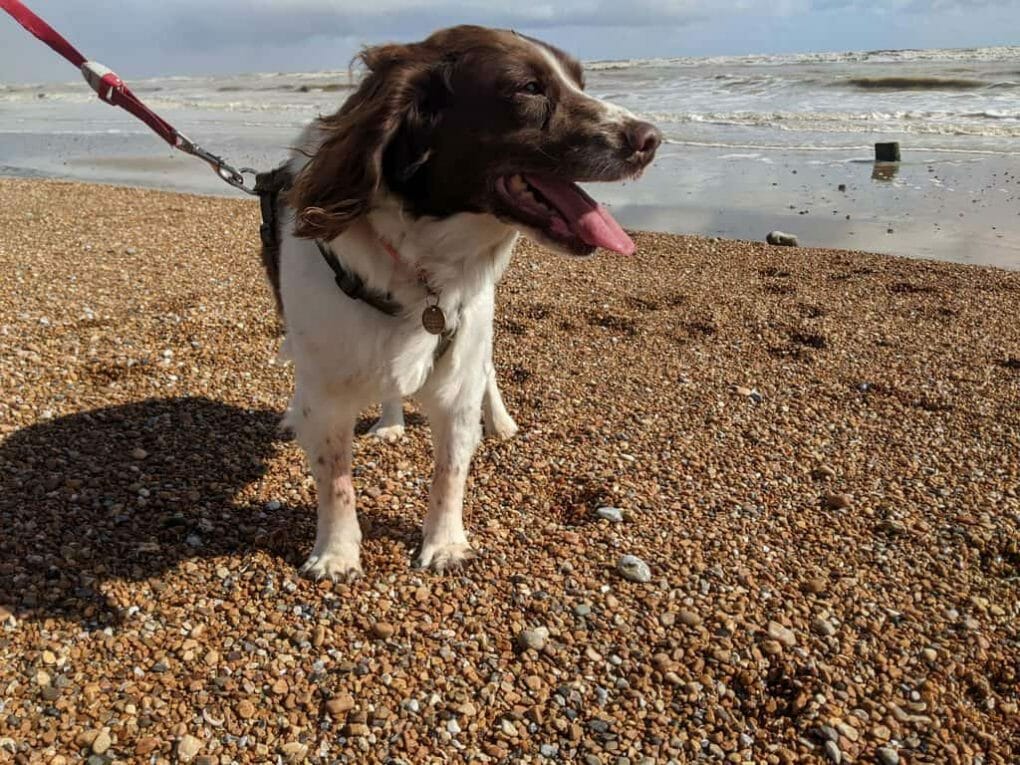 Bert has very much landed on his paws in his new home and is very pampered. [Just as all dogs deserve to be].

When lock-down incarcerated the nation earlier this year, his talented pawrents put pen, and water colour, to paper and wrote and illustrated this page-turning children’s tale.

Suzanne and Richard have published the book under the pseudonym of P.A Weasle – rather endearing don’t you think?

The story is very much the work of fiction, but the fact it is inspired by a cherished family pet, only makes it all the more engaging.

What is Bert Smells about?

Bert is a spaniel who lives on a farm. He has a loving home, a warm cosy bed and lots of toys.

Bert’s downfall is his love of rolling in all things smelly! [I’m sure there are lots of dog-owners reading this who can relate!] 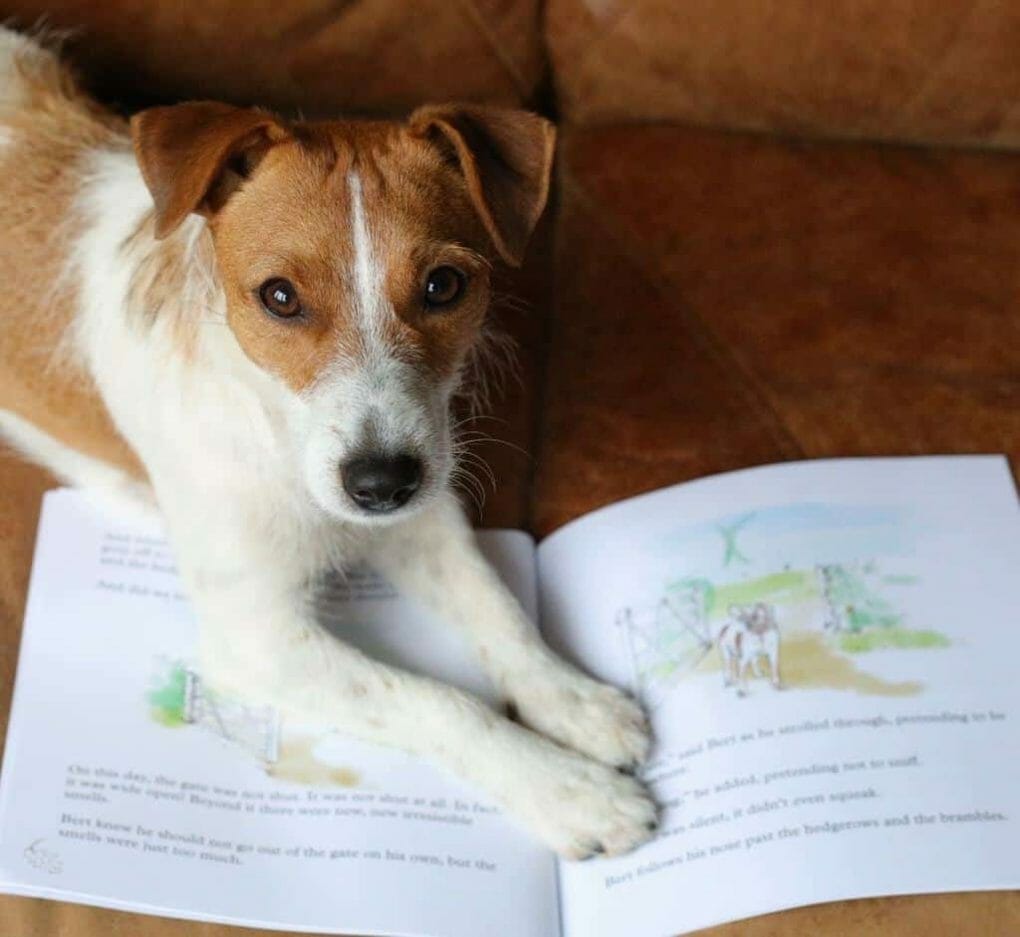 His ability to sniff out the smelliest, most undesirable of things lands Bert in a whole heap of trouble, when one day the garden gate is left ajar. A tempting new world of irresistible, pungent smells proves too much for Bert who goes exploring!

On his adventure Bert meets a series of animals, all of which are reluctant to engage in conversation due to his rather over-powering aroma!

From an adult perspective there is an ironic charm, not to mention humour, to the characters that Bert encounters. Animals which dogs either love chasing, or who are usually rather stinky in their own right! 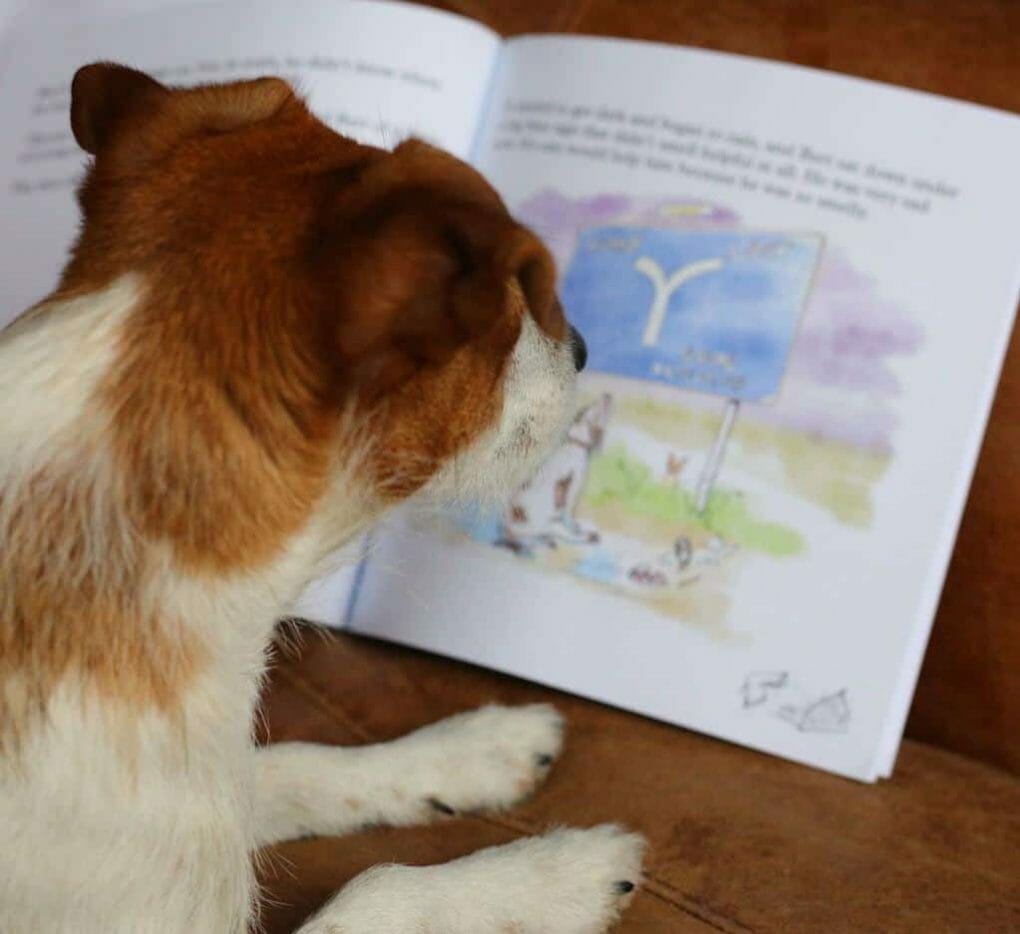 Squirrel, pigeon, rabbit, cow, rat and a gang of mice (who incidentally live in a discarded pizza box) are all appalled by Bert’s odour, and as a result Bert ends up rather lost due to their unhelpful nature.

Foxes are usually branded as sly, evil characters in children’s literature. However, in Bert Smells it is a kind, thoughtful vixen who saves the day and safely returns Bert to his loving family.

Bert Smells – The Moral of the Story

The story promotes inclusion and celebrates individuality, with a strong underlying moral that love and kindness conquer all.

Like many children’s books Bert Smells has a repetitive element, something which young children find captivating. They soon become familiar with Bert, his personality and his journey.

Children are able to join in with the story-teller. Giving them empowerment and ownership of the story almost from page one. 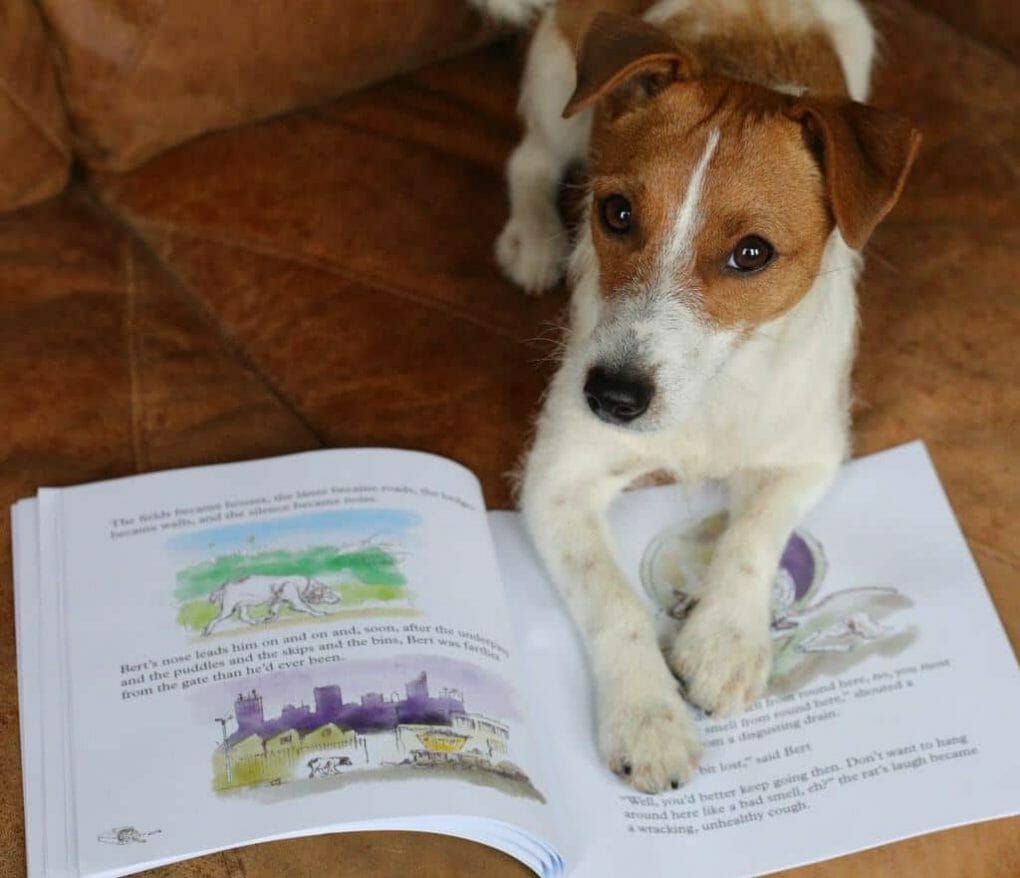 The charming and ingenious etchings, coupled with the carefully chosen illustrative language, enhance the story, giving it more depth and meaning.

Discarded banana skins, rotting fish bones, half eaten sandwiches and industrial skips give us an insight into Bert’s personality and his insatiable appetite for all things pongy and disgusting!

The story addresses many social and emotional issues, and will incite discussions among a younger audience. In my years of teaching, my favourite part of any day was sharing a picture book with my class.

Talking about the characters, discussing how the book made them feel and enjoying the colourful illustrations. It’s an intimate time in which children can express their ideas and explore their imaginations. 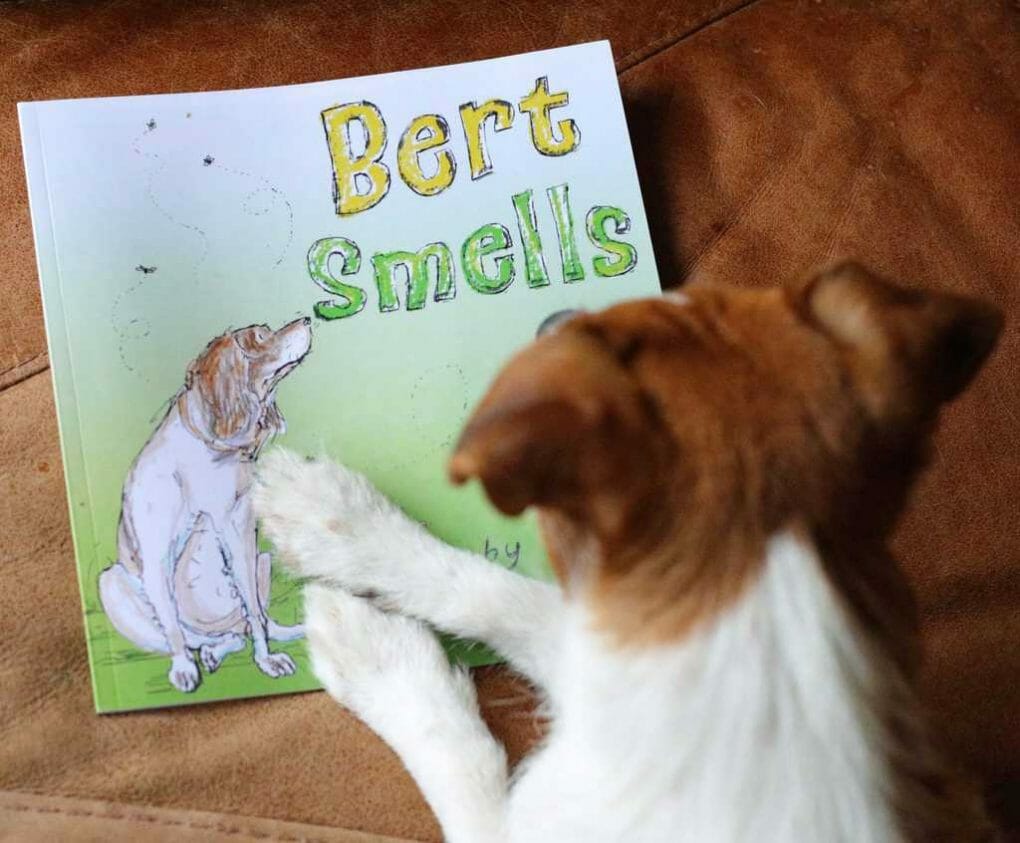 All of us, at sometime in our lives, can relate to the feelings of hurt, loneliness and prejudice that Bert experiences.

We can also no doubt empathise with the reactions of the other animals and rejoice in the heart-warming kindness shown by the fox.

Everyone will be able to identify with this story in some way and I’m sure it will strike a chord with readers of all ages.

It is aimed at children aged 4-6, but most definitely deserves a place on every bookshelf in my opinion. 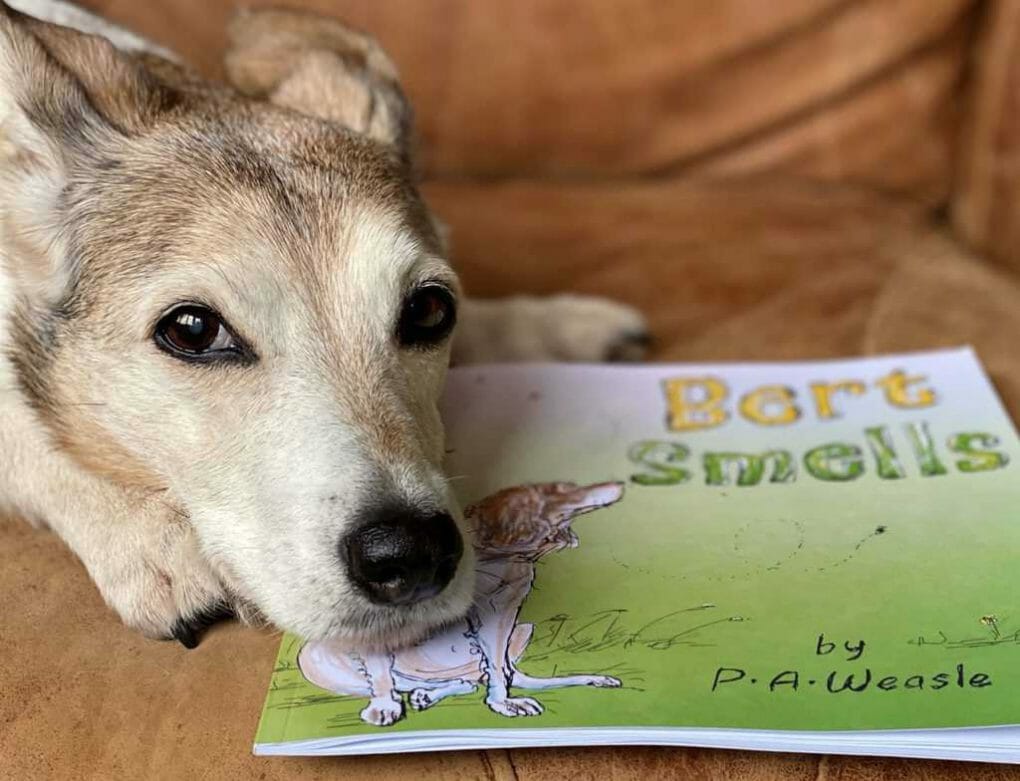 Please let us know what you think of the story if you are lucky enough to read it.

You can get your paws on your very own copy at Amazon.